Scars not Erased by Time: Stories of Victims of Turkish Attacks on Northeast Syria

Two children were killed, and two civilians were critically injured on 6 August 2022 in a Turkish attack on the densely civilian populated “Industrial Zone” in Qamishli city. Turkey acknowledged to standing behind the attack

An exclusive image showing the victim Ahenk’s mother holding his picture and looks in grief to another photo of him after he was killed in the Turkish attack on the “Industrial neighborhood” in Qamishli on 6 August 2022.

“My son Ahenk (15) was in the ninth grade. He loved sport. He was a goalkeeper in the Junior Team in a local football club in Qamishli city. But Turkey stole our kids’ dreams and left within us scars that time can’t erase.”

Said Akram Hussein, Ahenk’s father, the boy who was one of the victims of the offensive Turkish forces conducted in the “Industrial Zone” in Qamishli city on 6 August 2022 in which another child was killed.  The attack also critically injured father of one of the deceased children along with another civilian.

The operation was later found to have targeted a senior commander in the Kurdistan Free Life Party (PJAK) in Iran. Two fighters of the Syrian Democratic Forces (SDF) were also killed.  One of the survivors who is also a father of one of the deceased children confirmed that the attack was carried out with a Turkish drone.

Turkey acknowledged it was behind the attack. On 12 August 2022, Turkey’s state-owned Anadolu Agency said “the team that took part in the operation returned safely to Turkey”, indicating that some agents of the Turkish National Intelligence Organization (MIT) had participated in the operation within the Syrian territories, without disclosing if a drone was used or not.

In all cases, Turkey must promptly, impartially, and thoroughly investigate any civilian casualties that result from its operations. It should identify those responsible for civilian deaths resulting from violations of international humanitarian law and hold them accountable, provide compensation for wrongful civilian deaths and injuries and ex gratia payments for civilian harm.

On 6 August 2022, a huge blast took place in the Industrial neighborhood, also known as the “Industrial Zone” in Qamishli/Qamishlo. Two children identified as Ahenk Akram Hussein (15) and Ahmed Alaa al-Din Hussein (17) were killed. Also, Ahmed’s father and another civilian were seriously injured.

In addition, two fighters of the SDF along with Youssef Rabbani, a commander in the PJAK party in Iran, were also killed. It was clear later that the commander was the main target during the attack. 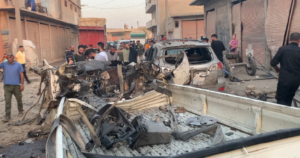 Image no (01), showing aftermath of the blast in the “Industrial Zone” in Qamishli on 6 August 2022. Photo credit: Hawar News Agency

Initially, only the two children were known to be killed and Alaa al-Din Hussein to be injured. In the evening of that day, the Internal Security Forces (Asayish) of the Autonomous Administration released a statement saying that a Turkish drone hit a car causing an explosion in which four persons including two children were killed and two other civilians were injured. The injured were taken to hospital for treatment. The blast also caused huge material damage to the vehicles and shops near the scene.

The next day, on 7 August 2022, the SDF released a statement stating that a member of the Military Discipline Institute of the SDF known as Mazlum As’ad (33), code-named Rokhaz Amuda, was also killed in the Turkish drone attack in the densely civilian populated area of the “Industrial Zone” in the center of Qamishli.

In a press conference in Qamishli[1] on 10 August 2022, the Internal Body of the Jazira Region in the Autonomous Administration announced the death of Youssef Mahmoud Rabbani, the commander in the PJAK party, as a result of the Turkish attack in the “Industrial neighborhood”.

Turkey Acknowledged it was Behind the Targeting Process

According to Anadolu Agency, Turkish intelligence, following thorough investigations, found out that Rabbani, code-named Rezan Jawid, was involved in multiple attacks on Turkish forces when he was in charge of Iraq’s Haftanin region, and that he was present in Syria.

Along with Rabbani, the MIT also killed Mazlum As’ad who was in charge of in the defense in Ad-Darbasiyah and Amuda areas, according to Anadolu Agency.

It is remarkable that Anadolu Agency’s statement “the team that took part in the operation returned safely to Turkey”, indicates that some agents of the Turkish (MIT) were inside Syria and participated in the operation against the “Industrial Zone” in the center of Qamishli where it is usually packed with civilians. The agency did not disclose whether a drone was used in the attack or not.

Image No. (02), showing part of the release published by Turkey’s state-owned Anadolu Agency on 12 August 2022, on the killing of Youssef Mahmoud Rabbani, during an operation carried out by Turkish Intelligence (MIT) in Qamishli city. Photo credit: Anadolu Agency.

Targeting densely civilian populated areas by Turkish forces violates the basic principles of the International Humanitarian Law (IHL) as well as the laws of armed conflict. Turkish forces volitation is evident in failure to observe the principles of proportionality and distinction and carrying out indiscriminate attacks, which is prohibited by the laws of war and can amount to a war crime.

The laws of war strictly prohibit attacks targeting civilians or civilian structures unless they were being used for military purposes, and prohibit indiscriminate attacks that fail to distinguish between military and civilian targets. Attacks must be proportionate, meaning that any anticipated civilian casualties or damage to civilian buildings should not be excessive in light of the concrete military advantage anticipated.

Under international law, Turkish Armed Forces must take all feasible measures to avoid, and in any event minimize, the loss of civilian life, injuries to civilians, and damage to civilian objects during military operations. That is, they should strictly abide by international standards and procedures with respect to their means and methods of warfare designed to prevent civilian casualties. Moreover, should robustly and transparently report airstrikes and enemy and civilian casualties.

Hevdesti-Synergy Association for Victims interviewed families of the civilian victims who were killed in the Turkish attack on the “Industrial neighborhood” in Qamishli in August 2022. The association documented their accounts and testimonies since it is well aware of the bulk of its responsibility towards the victims. Synergy’s strategy depends on an approach that focuses on experiences, points of views and priorities of the victims/survivors as an essential part of its daily work. In addition, it searches for multiple points of views in order to develop a thorough and analytical understanding of the events and commits to the highest degree of integrity and accuracy.

“My son Ahenk (15) was in the ninth grade. He loved sport. He was a goalkeeper in the Junior Team in a local football club in Qamishli city. But Turkey stole our kids’ dreams and left within us scars that time can’t erase.”

Akram Hussein, father of one of the deceased children.

Ahenk’s father, Akram Khalil Hussein (50), recounted to Hevdesti-Synergy Association the first moments of the targeting process on the “Industrial neighborhood” in Qamishli by Turkish forces. He said: [3]

“By time it was evening on August 6, I was at home in al-Antariyah neighborhood in Qamishli when I heard a loud sound as if it was an explosion nearby. I was very anxious about my son Ahenk who had lately started working in a mechanic workshop in the “Industrial Zone” because it was summer holiday. The shop is owned by one of our relatives. I rushed to the shop to check on my son.”

Hussein’s concerns increased as he got to the “Industrial Zone”. The explosion was in the same street where his son and relatives were working. Hussein continued saying:

“Only few minutes later, I got to the scene. It was too crowded. Bodies of the dead and the injured people were still on the floor next to the targeted vehicle. I looked among the bodies and I found my son’s body there covered in his blood. I came closer and checked his heart pulse. he had passed away.”

“Although I knew he was dead, I took him to the hospital hoping that he might breathe again. But the doctors confirmed me he was dead. I was devastated from the calamity that befallen us.” 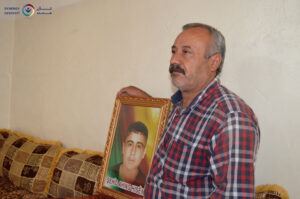 Image no (03) . An exclusive image showing Akram Hussein holding his son’s picture after he was killed in a Turkish attack on the “Industrial neighborhood” in Qamishli on 6 August 2022.

Hevdesti-Synergy Association for Victims also interviewed Alaa al-Din Hussein, one of the survivors and also a father of one of the children who were killed in the attack. Alaa al-Din has not recovered yet and he is still receiving treatment in his home in the al-Antariyah neighborhood in Qamishli.[4]

“We need a safe zone to protect us from Turkey and not the opposite. My son Ahmad (17) and his cousin Ahenk lost their lives as result of a Turkish attack and I was seriously injured. We have committed no fault except that we live in an area which Turkey considers as its enemy’s area”.

As for the attack, Alaa al-Din Hussein said that it was carried out with a Turkish drone. He narrated:

“I was busy working in my shop in the old “Industrial Zone”. As usual, the street was full of people and workers. Out of the blue, I heard a loud whistle. I looked up and found that a rocket was falling near us, where it hit a vehicle (Kia model). I fell on the ground and the shop’s door fell over me. I had injuries in many parts of my body.”

The witness survived, but his son Ahmed didn’t. he said sorrowfully:

“People gathered around me. My intestines came out. I said the Shahada/(the basic statement of the Islamic faith). People hospitalized me immediately during which I saw my son Ahmed lying on the floor next to me covered in his blood. I knew he passed away. I still wish I could die in his place. By his departure, I have lost the most precious thing I have in this life.” 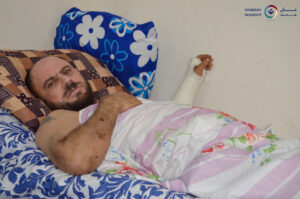 Image no (04). An exclusive image showing the witness Alaa al-Din Hussein in bed as he is still receiving treatment in his house located in al-Antariyah neighborhood in Qamishli after he sustained injuries in the Turkish attack on the “Industrial neighborhood” on 6 August 2022.

Instability as a Result of Turkish Threats and Hostilities

Turkish drone attacks and bombardment by Turkish forces and Turkey-backed Syrian forces against cities and towns in Northeast Syria have stepped up in the recent months, killing and injuring civilians, including children.

Frequent military threats and hostilities across Northern Syria continue to wreak havoc on the region, which is home to hundreds of thousands of internally displaced persons (IDPs) who fled other afflicted Syrian areas.

Hostilities in the region have hiked since August 2022. Areas in Northeast Syria witnessed dozens of mutual attacks with mortar shells, rockets, aircrafts, and drones. Turkey has perpetrated the majority of these attacks.

Hevdesti-Synergy Association for Victims joined 120 Syrian organizations which together released a statement on 23 August 2022, strongly condemning the repeated military threats and hostilities in Northern Syria and demanding the Security Council to immediately intervene to bring an end violence by taking firm measures to address instability and prevent new military operations in Northern Syria, notably that previous military operations have led to the displacement of tens of thousands of indigenous people. A numerous human rights violations have been extensively documented by international organizations and independent UN bodies on Syria.

[3] The interview was conducted face-to-face in the witness’s home in the al-Antariyah neighborhood in Qamishli on 19 August 2022.

[4] The interview was conducted face-to-face in the witness’s house in al-Antariyah neighborhood in Qamishli on 19 August 2022.