24 women and 12 children were among those arrested in 2021 and 2 detainees died under torture. 60 detainees have been released, while the fate of the 123 others remains unknown.

A fighter from the "Syrian National Army" interrogates children and residents in Ras al-Ain/Serê Kaniyê.

The “Hevdesti-Synergy” Association for the Victims in Northeastern Syria has documented that at least 185 people were  arrested in Ras al-Ain/Serê kaniyê and Tal Abyad at the hands of factions of the opposition’s Syrian National Army (SNA). Turkey assigned the factions’ administration of the region since they were occupied following Turkey’s “Peace Spring” Operation in October 2019.

Arbitrary arrests across Ras al-Ain/Sere Kaniyeا and Tal Abyad affected 185 people from across the region’s diverse population,  including both Kurds and Arabs. In addition to men, Hevdesti-Synergy recorded the arrests of  12 children and 24 women. Only 60 detainees were released as of the publication of this report, with two detainees dying under torture and the fate of the 123 others remaining unknown.

These statistics include people who have been arbitrary detained, often for the purpose of intimidating locals and encouraging them to leave the area.

July, August and September of 2021 saw the greatest number of arrests in Ras al-Ain/Serê kaniyê and Tal Abyad. In the three months alone,  82 arrests were recorded, among them 10 children and 9 women. Furthermore, it was during these three months that two detainees died under torture.

The first quarter (January, February and March) of 2021 witnessed 51 arrests, the second quarter (April, May and June) 24 cases, while the fourth quarter (October, November and December) witnessed 28 arrests.

Hevdesti-Synergy verified and documented the arrests in an online database, relying on information provided by a network of researchers based across both regions, as well as private records, eyewitnesses, and open source data to confirm the veracity of the arrest cases.  The names of the detainees, their nicknames, where they were arrested, and the dates of their arrests were all verified.

While Hevdesti-Synergy verified 185 arrests this year, its experts anticipate that the actual number of arrests in Ras al-Ain/Serê kaniyê and Tal Abyad is likely greater.

The arrests in 2021 are part of a pattern of arrests which began during the Turkish military operation “Peace Spring.” Since the occupation of Ras al-Ain/Serê kaniyê and Tal Abyad, beginning on 9 October 2019 until December 2021:

At least 90 detainees, more than half of them civilians, were transferred into Turkish territories by Turkish forces, where at least 48 detainees have been tried with sentences ranging from thirteen years to life imprisonment.

On 1 August 2021, forces from the SNA’s Civilian Police arrested 35-year-old “Ali al-Ahmad” as he attempted to illegally cross the Turkish border.

One day after his arrest, forces took Al-Ahmad to the general hospital in Ras al-Ain/Serê kaniyê.  On the evening of August 2, his health deteriorated as a result of wounds he sustained during torture. He died several hours later on August 3 in the intensive care unit.

The victim hails from the city of Al-Hasakah, and he came to the city of Ras al-Ain/Serê kaniyê, to cross into Turkish territory illegally.

On the 16th of September 2021, members of the “Suqur Al-Shamal” faction in the Syrian National Army arrested a displaced man,  “Hikmat Khalil Al-Daar”, on charges of cooperating with the Autonomous Administration.

Hikmat was detained arbitrarily, and he was taken to one of the detention centers of the National Army in Ras al-Ain/Serê kaniyê city, on charges of dealing with the Syrian Democratic Forces(SDF) and facilitating the passage of truck bombs to the area.

Days after his arrest, on September 20, 2021, the victim’s family received a notice from SNA forces to immediately visit the general hospital in Ras al-Ain/Serê kaniyê. Upon their arrival at the hospital, the family learned of the death of “Hikmat” as a result of torture. They received his body the next day.

Several images and video clips that circulated clearly showed that the victim, “Hikmat  al-Da’ar”, was brutally tortured to death, and the incident sparked widespread anger. 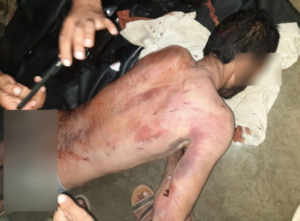 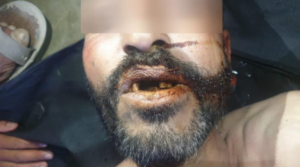 Picture No. (1) and (2) are taken from a video tape published by activists, showing the body of “Hikmat Al-Da’ar” with signs of beating and torture, after his body was handed to his family on September 21, 2021.

The report of the forensic medicine department at the health Directorate of the Syrian Interim Government in Ras al-Ain said that the immediate death of “Al-Da’ar” was due to high blood sugar, which reached 500,  causing him to have a myocardial infarction which ultimately killed him.

The same report confirmed that the traces of torture were visible on the back of “Al-Da’ar”, specially on his shoulder bladesand wrists, as well as swelling in the right lower extremity, and multiple wounds (longitudinal and transverse). No symptoms of illness were visible.

Picture No. (3), shows The report of the forensic medicine department at the health Directorate of the Syrian Interim Government in Ras al-Ain. Source: local activists.

On September 26, 2021, the “Al-Qar’an” clan (the Al-Akidat tribe), to which the victim “Hikmat Al-Da’ar” belonged,issued a statement calling for the formation of a “Shari’a Committee” to consider the accusation against the victim only, without considering the case of his murder. Following the statement, a legal committee was formed to look into the case, consisting of: Sheikh Abu Harith al-Shami, “a legitimate member of the Syrian opposition factions”, affiliated with Jaysh al-Islam, Sheikh Abu Anas Hamdan, “a member of the legitimate Committee of the Army of Islamled by Abu al-Rahman Ca’ake”.

On October 9, 2021, a decision issued by the committee acquitted the victim of the charges against him in dealing with the Syrian Democratic Forces (SDF), but the Soqour al-Shamal faction did not conduct any investigation into the incident. 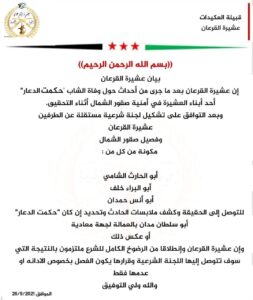 Picture No. (4), shows the statement of the Al-Qar’an clan about the death of the young man “Hikmat Al-Da’ar” and the demand for revealing the truth related to his “working for a hostile party”. 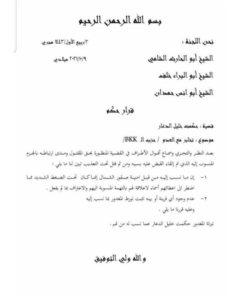 Picture No. (5) shows a copy of the statement of the “acquittal ruling” issued by the Sharia committee that was formed to consider the case of “Hikmat Al-Da’ar”.

To read the report as a PDF, follow this link.