Ras al-Ain/Serê Kaniyê: Forcibly seizing and investing the house of an IDP

During February 2021, the "Local Council of Ras al-Ain City", affiliated with the Syrian Interim Government of the opposition Syrian National Council (SNC), seized a house and shops owned by a forcibly displaced civilian from the city and turned part of it into a center for selling bread without informing the owner or getting his approval

The house of the forcibly displaced civilian, Jassem Sam'o, seized by the "Local Council of Ras al-Ain" and turned into a "bread sales center" without informing Sam'o or getting his approval - "Ras al-Ain Local Council" Facebook page

On February 7, 2022, the Local Council of Ras al-Ain city, affiliated with the Syrian Interim Government of the opposition Syrian National Coalition (SNC), published pictures showing centers they had designated for the sale of bread in the city. One of the centers was located in a house belonging to a forcibly displaced person, which was seized following the Turkish “Peace Spring” military operation against Ras al-Ain/Serê Kaniyê and Tal Abyad in October 2019.

The “Bread Sales Center – No. 5” is located in the Ronahi neighborhood in Ras al-Ain/Serê Kaniyê, within the house and shops of Jassem Sam’o, who is one of the Kurdish civilians who were forcibly displaced as a result of the Turkish military operation, and who now lives with his family in the Washo Kani/al-Twaina IDP camp in the city of Al-Hasakah.

Since the occupation of the city of Ras al-Ain/Serê kaniyê as a result of the “Peace Spring” operation in October 2019, Turkish forces, factions of the opposition “Syrian National Army” (SNA), and the local council of Ras al-Ain have taken turns seizing and using the house of Sam’o.

Zahra Samo’, the daughter of the owner of the seized house, who was forcibly displaced with her family to one of the IDP camps in Al-Hasakah, told “Hevdestî” that the SNA factions took turns taking over their house, following the Turkish military operation and its occupation of the city. She said:

“After the occupation of the city, the (Sultan Murad) faction turned our house into a medical point. Shortly after that, an armed person from the Al-Mu’tasim Division seized it and turned it into a shop selling different kinds of birds. At the end of 2020, a family from the Deir ez-Zor countryside settled in our house.”

Samo’ added that with the beginning of 2021, members of the Turkish intelligence forces seized the house and closed it completely, and they were prevented from approaching it. She added:

“We did not know the reason behind the takeover of the house by the Turkish intelligence. All we know is that it remained closed for about a year. After that, we heard that our shops in the basement of the house had been converted into a center for selling bread without informing us or getting our approval.” 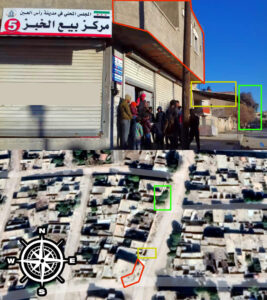 The photo on the top shows the house of Jassem Samo’, which was seized and turned into a bread distribution center. It was linked to the satellite image (below) after determining the location of the house. The first photo was published by the Turkish-backed Ras al-Ain Local Council.

According to Samo’, her family is afraid to return to Ras al-Ain/Serê Kaniyê, which is currently under the control of Turkey and the SNA over the city. She justified their fear by saying:

“We will never return to the city in light of its occupation by those groups that do not hesitate to commit violations against the population, especially the Kurds. It is a systematic measure to push the population to emigrate and not to return to the city again, as this illegal seizure of our property by the Turkish-backed factions, is frequent since the beginning of the Turkish offensive, without the slightest accountability.”

The Hevdestî/Synergy Association of Victims in North and East Syria has documented that the SNA seized more than 5,500 houses and 1,200 shops in Ras al-Ain/Serê Kaniyê and Tal Abyad, since the occupation of the area in October 2019.

The Turkish “Peace Spring” operation has also led to the displacement of approximately 175,000 people, including more than 80,000 children, from Ras al-Ain/Serê Kaniyê and Tal Abyad, where information collected by our association indicates that only less than 15% of the original residents of Ras al-Ain/Serê Kaniyê, returned to the area after its occupation, while more than 2,000 families were settled in the houses and the properties of the IDPs.

In the past two years, Hevdestî/Synergy has collected hundreds of testimonies about the violations and abuses committed by Turkey and its affiliated SNA factions, which are currently controlling the areas of Ras al-Ain/Serê Kaniyê and Tal Abyad and its countryside, including arbitrary arrests, enforced disappearances, extortions, , and the seizures of land and property, without any deterrent.