Hevdesti-Synergy called on the United Nations to take effective measures to represent communities of the victims and minorities in Northeastern Syria in all rounds of political negotiations on Syria and ensure that all nationalities, religions and ethnicities in the country are constitutionally recognized

Under the theme ‘’Review. Rethink. Reform: The 30th anniversary of the UN Declaration on Minority Rights Concept”, the 15th session of the UN Forum on Minority Issues was convened in Geneva on 1 and 2 December 2022. Hevdesti-Synergy Association for Victims took part in the forum and delivered a speech calling to reject the Turkish military escalation in Northeast Syria, document and condemn the violations perpetrated by all parties to the conflict in Syria and ensure that a comprehensive, impartial and non-politicized accountability process is advanced. As well as to take effective measures to represent communities of the victims and minorities in Northeast Syria in all rounds of political negotiations on Syria and a constitutional recognition for them. 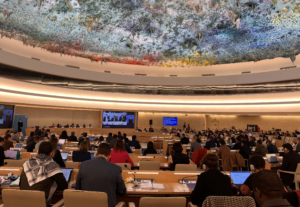 The UN Forum on Minority Issues 2022

The speech delivered by the CEO of Hevdesti-Synergy Association for Victims:

Thank you, Sir Chairman of the session,

My name is Izzadin Saleh. I come here from northeastern Syria, and I speak today on behalf of Hevdesti-Synergy Association for Victims, a Syrian organization that aims to achieve justice for the victims.

Prior to the onset of the conflict in Syria, the Syrian Kurds and the Yezidi community minority were denied access to their rights of equal citizenship and systematically persecuted and discriminated against, resulting in their denial of Syrian nationality and constitutional recognition.

After the start of the conflict in 2011, and due to deep sense of impunity by all parties to the conflict specifically in the areas under the Turkish control, such as Afrin and Ras al-Ayn/Serê Kaniyê, the grave human rights violation persisted and the majority of the Kurds, Yezidis, Syriacs and Armenians among others were forcibly displaced.

The Independent International Commission of Inquiry on the Syrian Arab Republic documented such practices and even confirmed that some of the aggressions appeared to be of a sectarian trend particularly when targeting religious shrines for the Yezidi community based in Afrin.[1]

Despite all of the outrageous atrocities the minorities in the areas occupied by Turkey went through, the Turkish government is still, and only days ago, using warplanes to target civilian objects and vital facilities in Northeast Syria, threatening and promising new military operations, noting that previous Turkish incursions were rife with human rights violations.

From this rostrum, we call to reject the military escalation in Northern Syria, document and condemn the violations committed by all parties to the conflict and ensure that a comprehensive, impartial and non-politicized accountability process is moving forward.

Finally, we call on the United Nations to take effective measures to represent communities of the victims and the minorities in Northeast Syria in all rounds of political negotiations on Syria and ensure that Syria’s constitution acknowledges all nations, religions, and ethnics present in the country.

“Truth and Justice Charter” Umbrella Widens to Include...

Signing a Cooperation Agreement between Hevdesti-Synergy and IIIM

Input for the Special Rapporteur on Violence Against...