The First Annual Forum for Victims in Northern Syria discussed the situation of human rights in the regions occupied by Turkey and the available mechanisms for justice, locally and internationally, and has concluded recommendations that guarantee the victims’ rights from their own perspectives

The Forum coincided with the third anniversary of Operation “Peace Spring” , highlighting the situation of human rights in Ras al-Ayn/Sere Kaniyê and Tall Abyad strips and the available mechanisms for justice, locally and internationally. The Forum concluded recommendations that guarantee the victims’ rights from their own perspectives.

Fifty people took part in the Forum, where most of whom attended in person while others participated virtually. There were seven panelists, victims/survivors, activists, human rights defenders, as well as several local, regional and international media agencies and institutions.

This Forum will be held annually, aiming at providing a platform or a space for the victims in Northern Syria to be able to represent themselves and claim their rights, in addition to coordinate among themselves and with other victims. 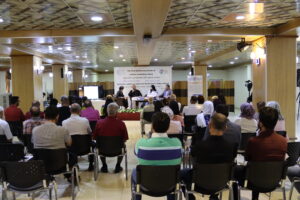 The Forum commenced with a short film titled “Undermine Peace and Coexistence” that tells the story of the Turkish forces occupation of Northeast Syria with the support of the opposition Syrian National Army (SNA). The occupation was known as Operation “Peace Spring”, which began on 9 October 2019, and led to Turkey’s occupation of Ras al-Ayn/Sere Kaniyê and Tall Abyad cities.

Four panelists participated in the first theme of the Forum. Gewan Isso, Head of Relations in the Committee of Ras al-Ayn/Sere Kaniyê Displaced People, talked about the situation of human rights in Ras al-Ayn and Tall Abyad. Another panelist, Sawsan Rashid, a Researcher for Pêl-Civil Waves Organization, spoke about the property rights violation in Ras al-Ayn, Tall Abyad, and Afrin territories and their impact on the forcibly displaced, mostly children and women. Sheikhmous Ahmed, Co-Chair of the Office of IDPs Affairs of the Executive Council of the Autonomous Administration also discussed about the situation of the camps that accommodate displaced persons from Ras al-Ayn, Tall Abyad, and Afrin, which are experiencing dire humanitarian conditions and have not yet received an international recognition.

Via Zoom platform, Shoresh Darwish, a writer and a lawyer based in Germany, talked about the Turkification policy adopted in Northern Syria and the danger it poses to the future of Syria and the region, as well as the ways to reduce it and eliminate its impacts.

A video graphic showing toll of the three-year human rights violations in the regions of Ras al-Ayn/Sere Kaniyê and Tall Abyad was displayed. Hevdesti-Synergy documented the killing of 56 civilians, among them 11 persons who were summarily executed, during and after Peace Spring Operation. Further 511 persons were arrested, including 68 women and 42 children, in Ras al-Ayn and Tall Abyad regions by the Turkish forces and groups affiliated with the Turkey-backed opposition SNA.

According to Hevdesti-Synergy’s documentation, more than 185 individuals of the arrested people have become enforced disappeared, and their families have no information about their fate. while 325 were tortured in prisons run by the Syrian opposition, where at least, five of them died under torture.

Hevdesti-Synergy confirmed the involvement of Turkey in the crime of concealing citizens from Northeast Syria and transferring them to its territories. At least 92 Syrian detainees were moved to Turkey during Operation “Peace Spring”. 48 of them were tried with arbitrary sentences ranging from 13 years to life imprisonment.

As a consequence of “Peace Spring” Operation, more than 150,000 of the indigenous people of Ras al-Ayn/Sere Kaniyê and Tall Abyad are forcibly displaced persons (FDPs). Turkey and its backed SNA have resettled more than 2,500 displaced families from other Syrian regions in houses owned by displaced and forcibly displaced civilians of the occupied regions.

Hevdesti-Synergy verified that at least 55 families, including women and children of fighters of the Islamic State (ISIS), who are mostly Iraqis have been accommodated in houses seized in Ras al-Ayn/Sere Kaniyê.  The Association also documented that the Turkish forces and the opposition SNA have seized more than 5,500 houses, 1,200 shops, and around one million donum (100,000 acres) of the farmlands in the regions of Ras al-Ayn and Tall Abyad. Moreover, 55 villages were emptied of their own indigenous people. 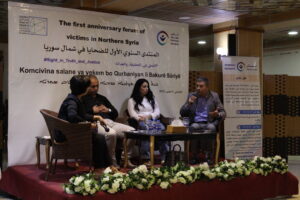 Discussions during the forum were unanimous in Turkey’s failure to assume its responsibilities to the regions it occupies in Northern Syria, where no serious measures are taken to ensure public safety and security. It also overlooked the intra-clashes among SNA’s factions and the phenomena of proliferation and use of weapons among the civilians under the lack of accountability and continuation of impunity.

According to Hevdesti-Synergy, from 9 October 2019 to 9 October 2022, Peace Spring strip witnessed 72 explosions that claimed lives of at least 145 civilians, among them women and children, and left more than 300 injured. In the first half of 2022, 46 cases of intra-factional fighting took place among the SNA’s factions in which three civilians were killed and more than 25 were injured.

Importance of Effective Participation of Victims in Accountability and Justice Processes

The second theme of the Forum focused on an extensive dialogue between the victims and the panelists concerning the available mechanisms for justice, locally and internationally, in the present and the future, as well as the importance of an effective participation by the victims, the survivors and their families in the processes of accountability and transitional justice in Syria.

Abdelsamee Abdullah, a professional international advocacy trainer, who has a great expertise in leading advocacy strategies and interventions with many international organizations, talked about the importance of advocacy and what all the victims can do to gain support for their cause. He signaled that the participation of victims, survivors and their families as key advocates for their cause has got a major role to win the cause for support because they are the best to illustrate the context and provide sufficient information and evidence on the cause so that clear messages to be adopted, recommendations to be given and solutions to be proposed.

Riyad Ali, a legal consultant based in France, who was once a prosecutor in Syria, talked about the available mechanisms of justice for the victims in Syria, noting the importance of documentation and collecting evidence and testimonies as a first step on the track of uncovering the truth, accountability and the pursuit of justice. 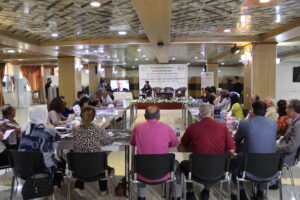 Hevdesti-Synergy’s Executive Director, Izz Adin Saleh, asserted the right of the forcibly displaced persons to a voluntary and a safe return to their hometowns. Rule No. 132 of the International Humanitarian Law (IHL) stipulates that, “Displaced persons have a right to voluntary return in safety to their homes or places of habitual residence as soon as the reasons for their displacement cease to exist.” This right imposes on the relevant authorities an array of legal duties mainly centered on the issue that displacement is a temporary situation. This was also asserted in the United Nations Guiding Principles which says, ‘’the competent authorities- mainly those which cause displacement in the first place- have the primarily duty and responsibility to establish conditions, as well as providing the means, which allow internally displaced persons to return voluntarily, in safety and with dignity, to their homes or places of habitual residence’’.

All the discussions were unanimous on the necessity to raise awareness on the importance of documenting human rights violations, to uncover the truth, as a fundamental right for the victims in their way to hold the perpetrators accountable in the end.

The Forum concluded some recommendations, the most important of which are: