Many Syrians have become victims of “fake news” alleging easy crossing to Turkey from the region of Ras al-Ayn/Serê Kaniyê. Hevdesti-Synergy Association for Victims documented the killing of one asylum seeker and the injury of another in August 2022, as well as the arrest of at least 10 persons in July while trying to cross to Turkey illegally

An armoured military vehicle drives past a wall along the border between Turkey and Syria, November 1, 2016. ©REUTERS/Umit Bektas

This report documents the killing of one Syrian asylum seeker and the injury of another with critical wounds as they were directly shot by the Turkish border guards (Gendarmerie) on 14 August 2022 while the two were attempting to cross to Turkey illegally from the region of Ras al-Ayn/Serê Kaniyê which Turkey has occupied since October 2019 in Operation Peace Spring.[1]

Furthermore, the report provides detailed information and accounts about the arrest of at least ten persons, including a woman, at the hands of factions of the Turkish-backed Syrian National Army/SNA in Ras al-Ayn/Serê Kaniyê and its countryside in July 2022 while the persons were attempting to cross to Turkey illegally.

Fake news/rumors contributed to an increase in number of asylum seekers who attempted to enter Turkey from the direction of Ras al-Ayn/Serê Kaniyê area but became victims later. Dozens were arrested by the opposition SNA in early 2022 for heading to the boarder ot attempting to cross it for asylum, while others were targeted by live fire at the hands of the Turkish border guards with the intent to kill them in, aiming at preventing them from crossing.

The information and testimonies verified by Hevdesti-Synergy Association confirm that leaders and fighters of the opposition SNA are running human trafficking operations and transport people illegally to Turkey in exchange for money. In a report published on 7 August 2022, the Association documented that at least nine intra-factional fighting/clash broke out among these factions in Ras al-Ayn/Serê Kaniyê and its countryside over the first half of 2022 for disagreements over distributing revenues of human trafficking.

Effective measures preventing Syrian people to enter Turkey started in late 2015. Turkey started to build a 911 KM long wall along the country’s border with Syria, where the wall consists of concrete blocks, each standing four meters high. On 17 November, 2017, the Turkish government announced that it has completed the construction of the so-called “Security Wall” along Syria’s border aiming to prevent the influx of terrorists from Syria into Turkey and to put an end to the smuggling operations between the two countries.

All the measures pushed the Syrian people to try illegal, mostly risky, routes in order to enter Turkey. As a result, Syrians have become victims of organized groups that transport people from Syria to Turkey illegally. The majority of these groups are connected to parties to the conflict across Syria in one way or another and the groups as well as their activities are being overlooked.

The Turkish government follows a policy of systematic brutality to prevent Syrian asylum seekers to access its territories. Since the construction of the wall, the Turkish border guards who are stationed along the strip border beat, torture and humiliate the persons who attempt to access Turkey illegally, and often target them with live fire killing and injuring scores of them.

Based on cases of arrests, killings and torture mentioned in this report, they are, undoubtedly, crimes and flagrant violations to the rights of those civilians in the framework of the International Humanitarian Law (IHL)[3] and the International Human Rights Law (IHRL)[4]. Let alone violating their right to seek refuge and forcibly returning those who survived to unsafe[5] conflict areas.

Killings by direct targeting and unlawful executions on the border strip are considered egregious violation to the victims’ rights to life and the insurance that no one shall be arbitrarily[6] deprived of their life as pledged by the International Covenant on Civil and Political Rights.

Concerning the arbitrary arrests of people who tried to cross to Turkey illegally at the hands of the opposition SNA and the ill-treatment the detainees went through, fall undoubtedly under torture, and therefore constitute a clear violation and a crime that is worth accountability based on the Convention Against Torture and Other Cruel, Inhuman and Degrading Treatment or Punishment[7] of 1984. Since all people, and particularly detainees, enjoy full access to their rights of life and personal safety against all forms of torture and nonhuman treatment that the IHL and the IHRL guarantee at times of war inasmuch at times of peace.

As an occupying power, Turkish authorities must ensure that their own officials and those under their command (The opposition SNA) do not arbitrarily detain, mistreat, or abuse anyone. The authorities are obliged to investigate alleged violations and ensure that those responsible are appropriately punished.

On 14 August 2022, Sulaiman al-Sayad (28), was killed and another young man was injured because they were directly shot by the Turkish border guards while the two were attempting to cross to Turkey illegally near the village of al-A’duaniya[8] in the west countryside of Ras al-Ayn/Serê Kaniyê.

Al-Sayad, married and a father of three, hailed from the city of Ras al-Ayn/Serê Kaniyê. Prior to his death, he had decided to immigrate to Europe through Turkey because of insecurity and the worsening living conditions in “Peace Spring” strip.

One of al-Sayad’s family member told Hevdesti-Synergy Association that al-Sayad was in a group of 15 who all tried to cross to Turkey illegally, but al-Sayad was the unluckiest person among them. He recounted:[9]

“Turkish border guards fired at our son Sulaiman and the group he was with at the time all of them were attempting to pass the border barrier. Some succeeded to pass while others retreated. Sulaiman was shot with three bullets in the chest. Another guy was seriously injured”.

AL-Sayad and the injured person were transferred to the Ras al-Ayn Public Hospital, but al-Sayad died en route. The witness added:

“One person from the group pulled Sulaiman away from the border wall, then contacted some of our relatives in al-Qle’aa village near al-A’duaniya/border crossing point and informed them of Sulaiman’s injury. Our relatives rushed to hospitalize Sulaiman to the Ras al-Ayn Public Hospital, but he passed away before he could get to the hospital”.

According to the witness, al-Sayad’s relatives buried him in al-Qle’aa in the west of Ras al-Ayn/Serê Kaniyê while the injured young man stayed in the intensive care unit in the hospital for treatment as doctors said he suffered critical injuries. 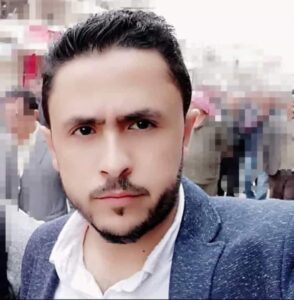 Image of the victim Sulaiman al-Sayad (28), who was killed on 14 August 2022 as Turkish border guards (Gendarmerie) shot him directly in Ras al-Ayn/Serê Kaniyê countryside while he was trying to cross to Turkey illegally.

In July 2022, Hevdesti-Synergy Association documented the arrest of at least ten persons, including a woman, at the hands of factions of the opposition SNA in Ras al-Ayn/Serê Kaniyê and its countryside while attempting to cross into Turkey illegally.

The testimonies Hevdesti-Synergy Association collected from detainees’ families said the detainees were subjected to ill-treatment and torture in the SNA-run detention centers. Some of those families were financially extorted. Six of the detainees, among them a woman, were released after at least four families paid ransoms for their loved ones’ release, while the fate of four persons remains unaccounted for.

A witness whose four members of his family were arrested in Ras al-Ayn/Serê Kaniyê told Hevdesti-Synergy Association that three of them were released but forces of the Military Police has kept one of them in prison despite the family paid ransom. He recounted:[10]

“Four individuals of our relatives were arrested by the Military Police in Ras al-Ayn/Serê Kaniyê while trying to cross to Turkey illegally. They were released on 5 August 2022 after we paid $2,500 to the Military Police. One of the detained persons has yet to be released under the pretense that the prosecutors are on vacation”.

Another witness said that the detainees underwent severe physical and psychological torture, adding they have no information regarding the proceeding of the prosecution or the mechanism of their release in terms of the legal aspect.

Another witness told Hevdesti-Synergy Association that his brother along with three other young men were arrested on the M4 Highway.  They were coming from areas under the control of the Autonomous Administration towards to Ras al-Ayn/Serê Kaniyê in order to cross to Turkey illegally. He said:[11]

“Forces of the Military Police arrested my brother along with three other young men on 5 July 2022. They were kept in a prison in Mabrouka town for 25 days in poor imprisonment conditions. The detainees were repeatedly subject to verbal abuse, mental pressure and shortage of food. In early August 2022, they were released after they were brought before a military court”.

In all the cases Hevdesti-Synergy Association substantiated, it turned out that the SNA did not respect prisoners’ rights. Various factions affiliated with the SNA have arbitrarily arrested and detained individuals, practiced cruel, inhuman and degrading treatment towards relatives of the detainees in various ways. One way of which is to extort them for money and another way is to deliberately conceal the fate and whereabouts of the detainees in violation to the IHL and the fundamental human rights principles.[12]

[1] Turkish forces launched Operation Peace Spring on 9 October 2019 and ended it on 22 October 2019. As a result, Turkey and factions affiliated with the Turkish-backed Syrian National Army/SNA controlled a strip of Syrian territory on the border that is 120 km long and 30 km wide between the areas of Ras al-Ayn/Serê Kaniyê, northwest al-Hasakah city, and Tall Abyad in northern Raqqa. The operation also led to the displacement of more than 175,000 people from the region, according to the Independent International Commission of Inquiry on the Syrian Arab Republic.

[2] According to official statistics published by the administrations of Syria-Turkey border crossings, particularly Bab al-Hawa, Bab al-Salameh and Tall Abyad, approximately 11,000 Syrian refugees have been forcibly deported to Syria since early 2022. This figure does not include asylum seekers who were captured while attempting to cross the border strip into Turkey illegally.

[5]  statement of Paulo Pinheiro, Chair of the Independent International Commission of Inquiry on the Syrian Arab Republic in front of the Third Committee of the UN General Assembly on 25 October 2021: “This is no time for anyone to think that Syria is a country fit for its refugees to return. Recent months have seen increased fighting and violence.”

[7] The Convention Against Torture and Other Cruel, Inhuman and Degrading Treatment or Punishment of 1984.

[8] Al-A’duaniya village, located in the west countryside of Ras al-Ayn/Serê Kaniyê on the border with Turkey, has been a point to transport people from Syria to Turkey illegally since the occupation of the region by Turkey in October 2019 in Operation Peace Spring. The SNA-affiliated Factions, notably the 2oth Brigade, use the village to collect money by imposing royalties on the persons wishing to cross to Turkey illegally.

[9]  The interview was conducted via the Internet on 15 August 2022. Information about the witness is withheld based on his request.

[10]  The interview was conducted via the Internet on 6 August 2022. The witness’s identity is withheld for his family members’ safety. One of the members is still detained by forces of the Military Police in Ras al-Ayn/Serê Kaniyê.

[11] The interview was conducted via the Internet on 5 August 2022. The witness’s identity is withheld based on his request.-